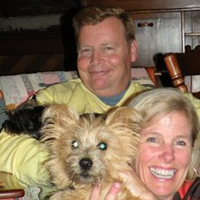 There is not a year, a league season, or a league that comes to mind that Charlie has not been a part of, either as a player or Captaining. In 2012, he may have captained at least 5 or more teams, and helped/co-captain a few more. He is always encouraging others to step up and captain, with his help and guidance.

He formed a club a few years ago, “RPTC” -Racket People Tennis Club. The club provides a pool of players from 3.0-4.0 which meets about 3 times a year. It schedules round robins to help determine where people should play. “It is opportunity for 3.0s to play with other levels in a less stressful environment”. The “RPTC” came out in full force last year, April, to help with the Special Olympics, which was awesome! There is so much more to Charlie and what he has accomplished with the Leagues, but for now, only a small portion I can share.

I asked Charlie why he loves tennis and does all the things he does? His response is a must read for any tennis lover.

***********************
“A mentor is a person or friend who guides a less experienced person by building trust and modeling positive behaviors. An effective mentor understands that his or her role is to be dependable, engaged, authentic, and tuned into the needs of the mentee.”

My favorite tennis rabbi was Jesus. His 7.0’s once tried to stop some parents from bringing him some young 2.5’s to train and this is what The Message version of the Bible said happened: Mark 10:13-16

“The people brought children to Jesus,….. The disciples shooed them off. But Jesus was irate and let them know it: “Don’t push these children away. Don’t ever get between them and me. These children are at the very center of life in the kingdom. Mark this: Unless you accept God’s kingdom in the simplicity of a child, you’ll never get in.” Then, gathering the children up in his arms, he laid his hands of blessing on them”.

“Life is so serious. I spend all day at work at my law office with my team of a dozen hard working and caring people and we fight for people to be able to keep their homes or at least sell them with dignity. This recession we are in sucks. Tennis is like a balm to my soul. For a few hours, the carefree child warrior gets to come out and taste victory or learn to deal with defeat. Doubles is especially fulfilling because if you can find a way to build up your partner, even if the match is going badly, you can change the result just with the power of encouragement.”

Call me crazy, but there are times when I feel my Tennis Rabbi’s arms inside my arms, “gathering up the children.” It’s like when Eric Lytle, the Scottish sprinter in Chariots of Fire was confronted by his sister – How can you waste time on trivial sport when . . . the world is going to hell in a handbag. Eric’s response to his sister said it all: “I feel His pleasure when I run.” I don’t know about you, but I quit feeling God’s pleasure in jogging years ago. But put me on a tennis court and new life springs up in these old limbs. I can’t help but share that life with other people who share a tennis connection with me. That was the driving force behind forming RPTC (Racket People Tennis Club). Tennis can be a passion without being an obsession. It can be a bridge to help others cope with life. I’ve been blessed with some of my best friends in life through tennis. I’m glad the Rabbi put me on the tennis courts and not behind a chess set or something.”