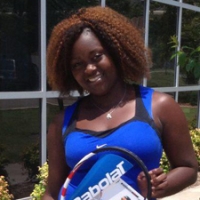 I called on Jennifer to captain in 2011 and she was very reluctant in doing so but took it on and she did a great job. In 2011, her 9.0 Mixed Team “Ass Kickers” advanced to the USTA District Championships. She has been very active with Jr Team Tennis and will be very active with the Youth Tennis Camps at the Hampton Tennis Center. She loves teaching the kids and she knows how to bring out the sparks in their eyes and the love of the game. She is a great role model never mind an awesome tennis player too! Jennifer has been playing tennis since she was 10 years old and loves everything about the game.

Jennifer is currently captaining a Mixed 18 & over team and after the season is completed, she plans to hang up her captain’s hat for a while. While disappointed to learn I will lose such a great captain, I am so excited for her. Why? Because she is starting two new exciting phases of her life. She was selected to be the new Head Tennis Pro at Hampton Tennis Center. As if a new job isn’t enough, Jennifer recently became engaged! So with a new job and wedding plans in the works, no doubt she needs time off from captaining! Hopefully it won’t be permanent.

I want to say thank you for all you do! Your teammates and I really appreciate your time and effort. Good luck on your new journeys of your life!!