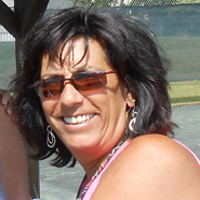 October 2012. “You know I’m in!” That has always been Leetsa’s response to the emails I have sent to captains at the impending start of any league. I guess I would be totally surprised if I get a reply saying “no” not this season!

Leetsa has captained a team, or should I say a few teams in my leagues. She has captained the variety — Adult Mixed, Singles, Combo Doubles, Combo Mixed, Tri-levels, and World TeamTennis. She is definitely one of my go to Captains when I have to get a new league off the ground. “You know I will help you,” she always will say (love her for that).

Leetsa is a good Captain because she is a “take-charge” person and she does it in her own style. SHE IS LOUD, but she is a Softy:)

In 2011, Leetsa took charge of a 5.0 (2.5/2.5) Mixed Doubles team as their Captain and did wonders with them. She was their Captain and mentor to those beginners and took them to their first ever Sectional Championships. This was in addition to captaining teams that she played on as well.

At present, she is captaining an 8.5 Combo Mixed and Women’s Tri-Level Team and in November will be heading to the World TeamTennis Nationals with her Teams to compete. So 2012 is not over for her yet!!

Thanks Leetsa for being You and supporting Me and your many Teams in Tennis!!