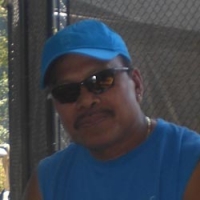 August 2012. Manny “Showtime” Bagtas is our August Captain of the Month.

“This is the moment of truth”, one of his various phrases for his team.

Manny LOVES Tennis and he enjoys captaining. “If I am not captaining, not sure what I would do with myself,” Manny has said. I can definitely count on him to captain a few teams in my league each season. At present, he is captaining three Combo teams and in the Spring, captained two mixed teams. So to date, five teams and the tennis league season is not over as yet. Last year, 2011 he captained at least ten teams. With all the different leagues in Virginia Beach, you can be sure he will be captaining at least 1-2 teams each season and most, if not all his teams, usually advances to a District Championships and beyond.

Manny taught his wife, Jeannette, how to play tennis so they could spend more time together. I have seen how patient and encouraging he was, and is, with her as she is still learning and he extends the same patience and encouragement to his players. I have had the pleasure of being on the court with him and have also experienced his encouragement and enthusiasm for the game. He is always willing to share his tennis experience with others. He is very caring and very dedicated to his players and the game of Tennis.

Sharing words from one of his player, which speaks volume for all his players:

“Manny is a great captain, mentor and tennis player. He encourages player development along with team camaraderie. Manny’s enthusiasm for this sport and his players is infectious which makes him an admirable captain. He devotes much time and effort in making his teams and lineups plus giving his teams every chance to succeed which his players appreciate. In the past several of years, he has captained more teams and more teams that have gone to districts and beyond. As a successful, captain he would credit his players but as described above, it is also due to all his tireless efforts which are now being recognized.”

“No matter how everyone plays or how the team is fairing he always keeps a great attitude as he just loves tennis.”