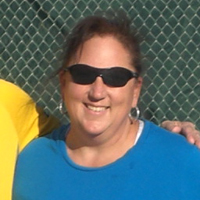 February 2012. Marjorie has captained at least 10 teams in 2009. She helps me in every way she can by captaining teams so we can have more teams in whatever league we are doing at the time. She recruits players to play and get them out playing whenever she can. She would divide them in teams and then someone would step up to Captain, and I am sure its because of her influence.

Marjorie always captains a team or teams in all my leagues, which include, Combo Doubles, Combo Mixed, Singles League, Tri-Level Mixed and Mixed League. I can always count on her to have a team. The best part of it all, is that she will help me to find players. I do like having her in my corner!

One of her many teammates stated, “Marjorie is one of the best cheerleaders and supporters of tennis in our area, and it would be great to recognize her.” I couldn’t have said it better. Thank you Marjorie for all you do!